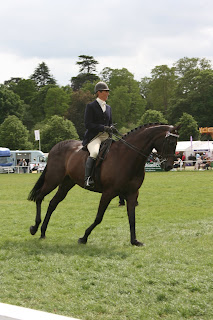 Comberton Clancy has been Champion on every outing this season. Recently at the Bath and West show, he took the title of Working Show Horse Champion having jumped beautifully and then continued on the following day to take the Riding Horse Championship. This is his first season at Moor Farm and Carol Bardo and Jayne Webber are “delighted” with the way he is going.

Team Bardo’s cobs are also performing brilliantly as well. Darcey Bustle won her first Horse Of The Year Show (HOYS) cob qualifier at the South Of England Show. She also went on to be Champion cob at South Of England. The experienced coloured cob, The Humdinger has qualified for both the Royal International Horse Show (RIHS) and HOYS in both the cob and coloured classes at his first attempts.
The South Of England Show also saw the team pick up their 100th win so far of the 2011 season with Mrs Stennet’s Time 2 Reflect. The four year old Time 2 Reflect won the HOYS Small Hunter Qualifier and has also qualified for the RIHS at the first attempt.