Kevin McNab is an Australian Eventer and regular member of the National Cup teams with an enviable record of top 10 finishes at CCI5. Kevin came sixth at Kentucky in April 2021 and now adds Olympic Silver medallist to his list of achievements!

In 2020 Absorbine Ambassador, Kevin had qualified four horses for the Olympics but then the Covid pandemic struck, and everything was placed on hold. By the summer of 2021 Kevin and Scuderia 1918 Don Quidam (Don) were on the Olympic shortlist as the non-travelling reserves for Tokyo.

Following his performance at Kentucky did you feel that Don was ready for something bigger?

“He came away from Kentucky feeling very confident and good in his body and definitely felt ready for Tokyo after such a good performance.”

Did you change anything in Don’s training in the run up to the Olympics that helped you get picked for the team?

“I followed the same preparation for the Olympics as I did for Kentucky because I felt that we produced a great result there. Our result at Kentucky got us closer to a spot on the team.”

When did you first think there was a chance you might get on the team?

“I’ve always thought a lot of Don but after Kentucky it was the first time we could go to the selectors and say, ‘We’re ready to be on a team’. Selection is a very detailed process but current is always key.“ 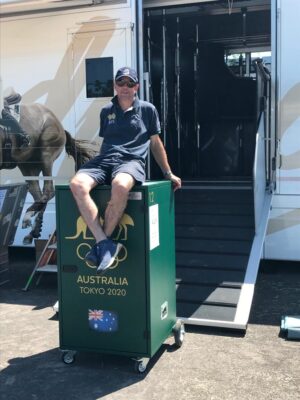 Earlier in the year, did you think that the Australian team could bring home a medal at Tokyo?

“Yes. Australia’s always been very strong in Eventing, and I felt that being strong XC was going to be very important at Tokyo with the new format. I think this showed when we were there.”

Once selected how did you go about preparing for the climate change in Tokyo?

“We didn’t change a lot as far as this goes. Don has always been a tough horse and performed better in warmer climates and being from Australia I’m accustomed to the heat.”

What was it like getting the call to be asked to travel?

“It was a very welcomed surprise. It was before our Tokyo training camp had started which meant when we arrived at PEQ (pre-export quarantine) we were packed and mentally prepared to be to be getting on the plane.”

What is the process of travelling a horse to Japan?

“We had a PEQ for one week because of Covid. The horses went on a lorry to Liege, Belgium. They stayed overnight there and flew out to Tokyo the following day. The horses travel in crates with two horses per crate. Our team vet travelled with the horses.”

“His trip to Kentucky was very good practise for Tokyo and allowed us to work out how he would handle this trip to Tokyo. He travelled well then had a quiet couple of days which allowed him to adjust to his new surroundings and the climate.” 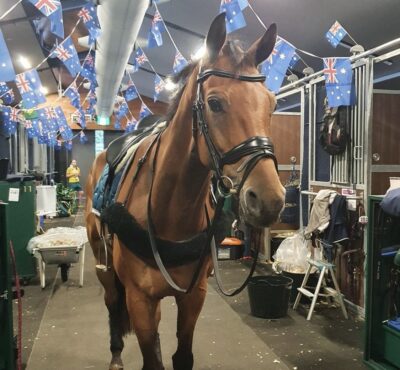 What is the role a reserve plays in an Olympic team?

“We did everything the same as the team, so you were prepared at any stage of the event to step in and compete. I really credit our High-Performance Director Chris Webb for how well he ran the management of the team in Tokyo.”

When did you find out you were going to be competing and were you nervous?

“We were walking the XC course the afternoon before the first day of Dressage and Stuart Tinney congratulated me and explained that I would be doing the Dressage the following day.  I was excited to be competing and I think this news moved me into a new level of focus.”

Did starting out as a reserve then becoming part of the team add to the pressure?

“Yes, I think so as it’s another aspect on top of the normal competition pressure we face all the time.”

Who else is part of the Australian team other than the riders?

“An enormous group of people. One of the main people we rely on is Erin O’Neil who is our Eventing Manager. She basically organises everything for us. If we have a problem with anything we go to her. Lucy Hartley is my groom and is the ultimate professional in these situations. Our coaches, Sune Hansen (Dressage), and Nelson Pessoa (SJ). Vets Nathan Anthony and KP. Then we had a physio and photographer.”

Is the Dressage phase a strong phase for you?

“Normally but we made a few small mistakes which were costly, so I was disappointed with our score but still proud of Don.”

The cross-country phase was a great day for Australia. What was your plan of attack for the course?

“My plan was always to post a clear round and then be as close to time as possible. I had always planned to take the slightly longer option in the second water and at the coffin. I think this plan worked well because Don felt great the whole round, was only a couple of seconds over the time and felt fantastic the next day.”

Was it better to go first in the Show jumping?

“I was very happy to go first and put a clear on the board and take the pressure off Shane and Andrew.”

Can you put into words how it feels to be awarded an Olympic medal at the ceremony and hearing your national anthem?

“Surreal. It takes a few days to sink in just what we actually achieved. How many people get to take home an Olympic Silver medal in their lives? 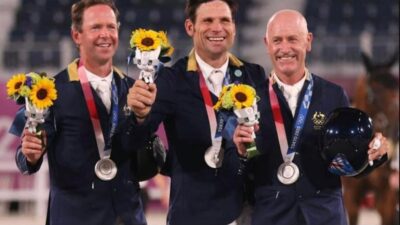 I am very aware of just how lucky I am to have so many people contribute to my success that, in a way, this was a silver medal for everyone.”

Since returning from Tokyo you’ve gone from strength to strength.

“I have been lucky enough to have had some big successes following Tokyo. A win like that gives you that extra confidence as you trot down the centre line.”

“WEG in Pratoni next year and then … Paris 2024! For this year I have two horses, Cute Girl and Glenorchy, competing in the 7-year-old Young Horse Championships in Le Lion and then Scuderia 1918 A Best Friend in the 5* at Pau.”

**This interview was originally provided by Absorbine for use in Absolute Horse Magazine.