Getting a taste for it…

“The whirlwind of shows continues! After arriving back late Sunday night from a successful Stoneleigh horse show where the horses did us so proud, winning 5 HOYS qualifiers and gaining another 3 HOYS tickets, we then left on midday Monday for the Great Yorkshire show.  What a fabulous time we had – winning Championships in the Coloured and Hunter classes then standing top and qualifying for HOYS in the Ladies. We are on cloud nine.

We now turn our attention to the TSR this weekend then off for a week at the RIHS where we will be competing the usual mix of experienced and novice horses. 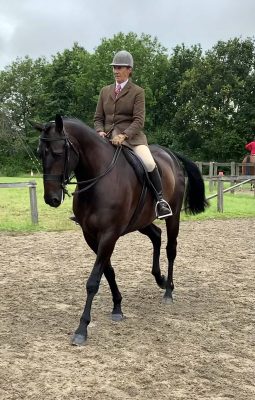 Our novice horses have acquitted themselves brilliantly this season which is particularly commendable given they had limited opportunity to get out and “see the world” last year due to the covid restrictions.

It is so important to prepare youngsters for shows and I like to take them to have a look around and get used to the hub bub of things before they are going to compete.

That has not been so easy to do this year because we are trying to get every horse that needs to get into the ring to a show. We often have not had a slot on the lorry for the novices who need to familiarise themselves.

One of the ways we prepare our youngsters for a show environment is by getting them used to groups of other horses. That can mean hacking out in groups, but we are also lucky that we have enough horses to be able to create a bit of a buzz in our arena. We take a few in at a time and get them used to horses going around as well as playing some music to recreate the feeling of a show.

We also hire a few local venues that have all-weather cross-country courses and big arenas and have taken 5 or 6 horses to meet up with a couple of other horses just to get them out in a different environment.

Another method of preparing them without going to a show is taking them for a practice run at an indoor school so they can have a look around. Although they may have travelled before they might not have been in a lorry with several horses, so this gives us an opportunity to get them used to lots of horses clattering up and down the ramp.

It is important to consider who the ride judge is for the first couple of shows. For example, if your horse has not had a tall man onboard before it might be better to go for a judge of similar build to their usual jockey. We are lucky to have a choice of riders so our youngsters can get used to a variety  before their first outing. One positive thing to come from the restrictions during Covid is that is has helped some of our first timers learn the ropes in the ring without a ride judge as they have only recently been allowed back on board for qualifying classes and some novice classes are still just giving shows. 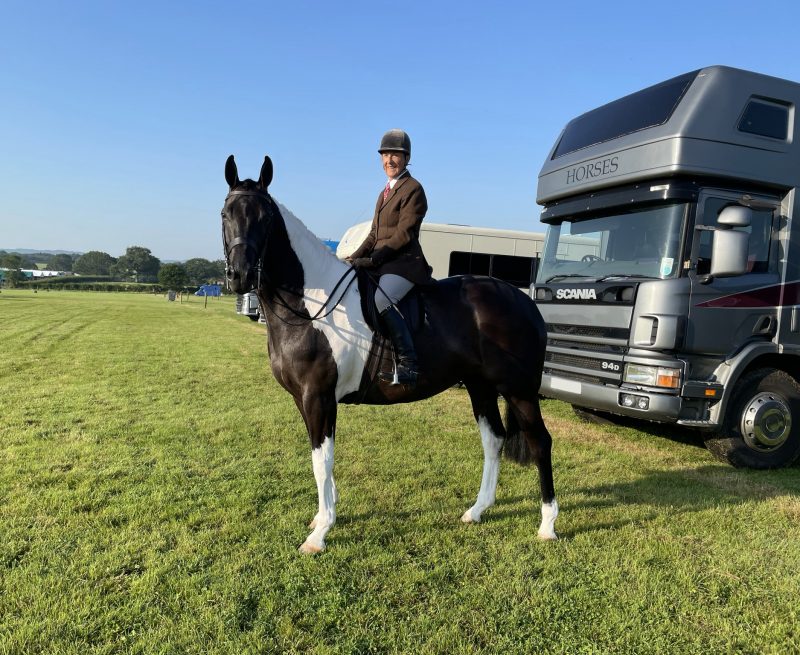 Of course, there is no substation for being at a show so if you can take a youngstr with a more experienced horses that is ideal.  Even if a youngster has been shown in hand in the past it is very different when it is being ridden for its first outing – sometimes novice horses can lack concentration.

When you get to a show with a youngster it is helpful to ride around and get a flavour of the crowds, the warmup area and the general atmosphere of things, however, make sure you have plenty of time, don’t rush them or overdo it.

There is no point taking a horse that is not quite prepared or not settled enough. For one thing it is imperative that they ready for a ride judge. Sometimes as good as they are you get them to a party, and they change – their mind is not quite on the job, they are not concentrating or listening to you, so you must take all that in to account and not put them in the ring if they aren’t ready.

Once you do decide they are good to go give yourself plenty of time to get there and if it is a long way – allow extra time. If you are travelling to a show on a Bank Holiday Monday, for example, allow more time than you would on a Sunday. Silly little things like that make a big difference and mean you arrive at the show less stressed, ergo your horse is less stressed!

If you know you have a horse that might get revved up walking through crowds or down the side of walkways give yourself more time because they need to settle back down again before going into the ring. There is nothing worse than being late to the ring or in a rush.

If anything does go amiss do not put any pressure on your horse and certainly do not take them home and drill them into going well again. If you have to go back to another show because they didn’t get a qualification as something went wrong, was it a situation that can be avoided in the future, can you change something, so you don’t have it happen again.  Know your horse, read your horse, and don’t rush them – it should be a nice experience for them and for you!”