Winner of the Horse & Hound Absorbine® Groom of the Year Award, Tilly Hughes tells us about her “year out” to work with horses!

The Horse & Hound Groom of the Year Award is sponsored by Absorbine® and celebrates the outstanding grooms without whom the equestrian industry would simply grind to a halt. It honours their dedication, skill, and love of horses.

The winner of the Absorbine® Groom of the Year Award 2021, Tilly Hughes, is travelling groom to Olympic eventing champion Laura Collett who won a team gold medal at the Tokyo Olympics.

Tilly said “I couldn’t believe it when I got the phone call to say I had been nominated for the award because I haven’t been a groom for that long really. There are so many great grooms out there who have such a lot of experience it can sometimes feel a bit daunting. Being nominated gave me such a boost, it lets you know you are looking after the horses well and that you are appreciated.”

“So many other amazing grooms have won the award in the past like Alan Davies, Jane Felton and Amy Phillips. I have worked with some of them or seen them at events and they are all fantastic – I look up to them, so I was thrilled to be nominated for an award that they have won and utterly shocked to win myself!”.

“I wasn’t there on the night because I was on holiday so Jane Felton, who is a good friend of mine went in my place. I found out at about 2am when I woke up and looked at my phone and saw that Jane had sent me a photo of the awards ceremony and my name displayed as the winner”.

Tilly grew up on a farm where she and her sisters had ponies from a young age. Her interest in riding blossomed there and she went through pony club and onto some eventing. After her A-levers she secured a place at university to study forensic science. However, Tilly decided that she would like to take a gap year and work with horses to “get them out of her system”. Having seen an advert on Facebook with Jonty Evans, she applied. Tilly said “I never thought in a million years I would actually get the job because although I had experience with my own horses I had never worked on a yard before. However, I was offered it and was there for a year. I loved it but it was a mixed year because Jonty had a horrific accident at Tattersalls International Horse Trials and had to close the yard”.

“I wanted to continue my horsey break and work another year, so I went to Laura Collett’s yard that wasn’t far from Jonty’s at began working there”. 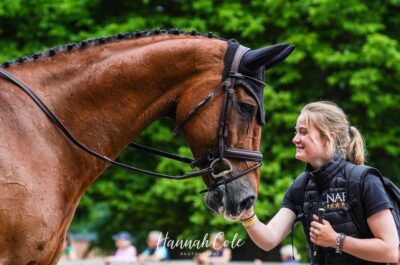 After the 2019 season Tilly left Laura’s yard to go travelling only to find COVID put an abrupt halt to her plans. She returned home and felt was still not ready to give up working with horses. She asked Laura if she could return and started back with her in August 2020.

As it turned out this was just great timing as Laura and London 52 (Dan) were going from strength to strength competing at Le Lion d’Angers and Pau where she won the CCI5*. Tilly recalls “The Olympic selection process is really difficult and although Dan was on such good form you never really know until the last minute if you are going”.

However, eight years after Laura’s her near fatal riding accident, she and London 52 were selected to represent Britain at the Summer 2020 Olympics as part of the British eventing team. Tilly admits that being the travelling groom for Tokyo was the highlight of her career. “You don’t get much better than the Olympics and I was incredibly lucky to get to go because I haven’t been a groom for that long, so I was lucky that Laura trusted me to go with her”.

“Tokyo was my first championship, and the facilities were amazing. Everything you needed was right there so as a groom they made it as easy as they could for you. I was completely star struck by all my equestrian idols just walking around – it was like a dream come true!”. 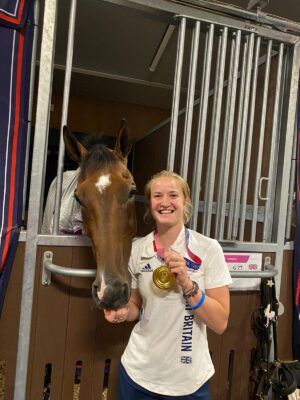 Tilly says she learnt how to be a successful groom from Zanie King, one of the best event grooms who had travelled a lot with Laura and who helped Tilly at her first big competitions.

“I don’t regret for one minute deciding to work with horses and not going to university. Grooming is a challenging job, but I thoroughly enjoy it and love working at Laura’s yard.

Tilly’s advice about becoming a groom:

Just throw yourself into it because you get out what you put in. It isn’t a 9-5 job; it is a lifestyle that you live and breathe. You can’t be half hearted, and you must really love it, but it is so rewarding.

Be super organised. I am obsessed with lists and write everything down. At a competition I write down all the timings, such as when Laura wants to get on when we need to be tacked up by etc. So, if everything has a set amount of time even if you do forget something generally you have left yourself a little bit of extra time. There is not much you can’t solve if you have an extra 5 minutes.

Know your horses, know your rider and if you do that you can generally tell what they are thinking and what they need before they even tell you.

We are always mindful of the horse’s feet on hard ground and use Absorbine® Magic Cushion® because it quickly reduces any heat in the hoof. It is great for a 3 Day Event after the XC or anytime when the horses run on going that is firm.