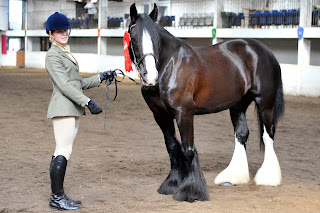 Ashleigh Thornton and her lovely bay mare Bellasize Francil Alice are the well deserving winners of the May Online Photo Shows (PSO) Absorbine sponsored Best Turned Out Class.
Alice is 15.3hh and is a Shire X Cob. She is out of a Shire mare, the famous Bellasize Sovereign is her grandsire and she has turned out to be a miniature Shire/traditional gypsey vanner with plenty of feather. This is the first time Ashleigh has entered PSO and sahe says “I will definitely without a doubt be entering again. The ease of everything is great, friendly people, the amazing prizes and the idea of not having to wake up at 5am to wash Alice’s feathers in preparation for a show!”

Ashleigh has had Alice on loan following an advert on horsemart. Ashleigh says “I got a phone call from a friend telling me Alice was for loan whilst I was at my grandmas funeral and knew it was something that was meant to be, so I rang the owner and told her a bit about myself and my experience with horses. She told me what she was wanting and that she had over 40 applicants for the opportunity so we discussed it and that night I went to ride there. Everything seemed to fit into place, the agreement was that I would help with all the jobs in return for free riding, and lessons from a top dressage and showing instructor. It’s been great for me and I’m very grateful for this opportunity. In December we bought a Friesian colt to add to the collection of Ramsey, a 30 year old cob, Foggy, a six year old Hunter type and Alice, my favourite who had been there for only a few months before I met her. She was still very green last winter and she had a short tail. She came off a working farm in poor condition where she used to pull harows and chains all day long.”

Alice has had a a big change in lifestyle, since Ashleigh has had her the pair have been to plenty of shows. Ashleigh said “we do well in best condition and turnout as well as classes based on conformation such as heavy horse and cob classes, we have also done two equitation classes and we did really well in both of them.” Ashleigh is so grateful for this chance to take Alice off out and about “I thank Alice, her owner and my instructor for it all, my riding has improved so much and the best comment ever was ‘you work so well together’! So far we have had a win at everu show we have been to and I couldn’t be prouder of Alice, not just for the red rosettes but her constant efforts to please. The past six months really have shown what team work can achieve and she’s a whole different horse now.”
Apart from being the most hard working and willing to please horse Ashleigh has come across, “Alice will also try her best to eat anything: cake, bananas, crisps, crisp packets, chips, evevn the string you tie your competition numbers on with. She undid the bow right in front of the judge once at a show, luckily for us he found it really amusing which added to his positive opinion about her and we won the class! But she really doesn’t like croissants and spits them out at you!”
Ashleigh is just finishing her GCSEs this summer, she believes though that “theres nothing like coming home from exams to a horse that will canter over to you, only to play catch-me-if-you-can when the headcollar appears and spending a good half hour watching her canter round the field and ending up sitting down in a field with a headcollar and lead rope tryinyg to convince her to come over.”
Ashleigh is also a fan of Absorbine SuperShine Black and says “I wouldn’t change it for the world, I swear by the stuff! I never look at any other products when buying hoof shine, I go straight into the shop and its at the till in seconds, I have also used Absorbine ShowSheen on previous horses and occasionally on Alice, although due to her breed/type she has to be as natural as possible so products are kept to a minimum, but I think it achieves a very natural looking gleam on the coat and adds that extra ‘wow’ for shows!”
Best of luck to Ashleigh and Alice for all their future shows and PSO shows!