Liz and Darcy are April Best Turned Out Winners 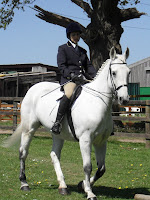 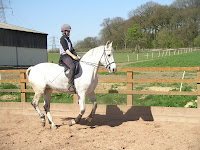 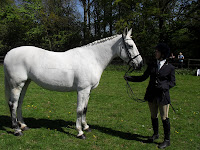 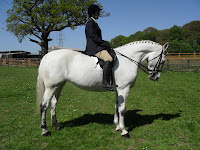 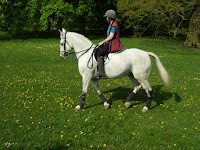 Liz has owned Darcy for the past 12 years. She bought her as a three year old from the owner of her livery yard, who herself had bought Darcy in Ireland.
Liz used to take Darcy to lots of shows and pleasure rides all over the Midlands until a few years ago. Liz says “one day in a friend’s trailer after doing some local jumping, Darcy started collapsing in the trailer on the way home. It was horrible and I will never forget the banging, for some reason that we will never understand she just kept going down and scrambling back up. At one point we we stopped and I stood in the trailer with her and she just leaned to one side and went down again. We had no choice but to get her out of the trailer, as soon as she was out of the trailer she seemed fine, so I tacked her up and rode her the last few miles home.” After such scary experience Liz does not travel Darcy anymore, so PSO has become a great activity for the pair, “I first entered PSO in July 2010 and came 3rd in the best lightweight class. Because of our travel problems, PSO is a great way to compete.”
Liz does however still hack to their local show to take part in Ridden Hunter and Dressage, Darcy has even competed in handy pony, although she didn’t really take to this!
Darcy lives in a livery yard, on full livery, Liz however says “I go 5 days a week rain or shine. Even though it is full livery when I’m there I do most of it myself, it’s part of owning a horse.” Liz is married with two grown up children and works part-time for a company that makes and installs electrical control panels.
Liz is definitely on the lookout for more Absorbine products now, as never having used them before she is looking forward to trying out her new bottle of ShowSheen Continuous Spray!