Back doing what we love!

“Team Ross has been a hive of activity in recent weeks, and I feel we have gone from one extreme to the other. The slower pace of life is behind us with 3 shows under our belts in as many weeks and another next week.  We are delighted to be back out again, but I must say the early mornings have taken a bit of getting used to.

Everyone is being careful about covid regulations, but it is lovely that owners are allowed back in to show grounds. It’s amazing how quickly the covid regulations have become the “norm”, but we are all mindful not to overstep the mark as we so desperately want everything to work out. Hopefully, with the Government looking like they will continue to allow further easing of restrictions in the coming weeks, we will be able to have ride judging again soon.

We had been planning to take some of the novices out to an indoor arena for some experience before going to a show, however with the last-minute change to legislation for indoor arenas in England this didn’t happen. Despite this we are incredibly lucky that the horses have behaved themselves thus far.

Our first outing was to Dallas Burston where Imogen Trice, owner along with her sister Lydia, of Dharmavllye, had a great ride to win the RIHS amateur hunter champ, followed by 2nd in the novice riding horses with their youngster Ballinameesda and finishing 2nd in the open small hunters – her 2nd RIHS ticket of the day.

What a day for Harbour Master who won the novice hunters, then went on to take the novice ladies with Ciara Mullen and then won the overall novice championship.

Liz Trembath and Charlotte Clarke’s 5-year-old Harbour Master was at only his 3rd ridden show and has only had the side saddle on a few times, he did himself proud and we are looking forward to watching him progress.

In the RIHS open hunters class Sam Powell’s Bloomfield Greystone had a great time and stood 3rd in the MW hunters.

The following weekend we set off early to the Arena UK in Lincolnshire where Kay Campbell’s lovely novice hack, Ballarin Rosabella had her first outing this season and promptly won, then went onto take the novice champion with me onboard. I had a quick swop to the hunters, where Sam Powell’s Bloomfield Greystones won the novice hunter, then Ciara deputised for me in the MW on him and took 2nd and his RIHS qualification.

Ciara came 2nd on Linda Upton’s Whalton Reprise in the ISRT, another on her first outing for the season.

Sarah Harper’s Wall Street is really growing up each outing and took his 2nd small hunter class and hunter championship in 7 days.

It was then the turn of the coloured and the charming novice KBF Lucia, owned by Debbie Harrod, won her novice coloured class at her first ridden attempt! ‘Poppy’ as she is known at home, is as delightful as her big sister KBF Crescendo (‘Daphne), who, in her first class since HOYS 2019, picked up where she left off, taking her coloured class and championship. Both Daphne and Poppy are bred by Michael Cook and Tony Reynolds, their sire is Free Spirit, and have the most fantastic temperaments. KBF Lucia is certainly one to watch for the future!

We were blessed with glorious weather for our outing to the BSHA Southern show where we had a mix of novice and open horses out.

Debbie Harrod’s KBF Paved with Stars, a 5-year-old at only his 3rd ridden show, won the novice hunters. At nearly 16.3hh, I am still amazed that his mother is the beautiful Berkeley Square, who was a prolific winner for me and her owners Michael Cook and Tony Reynolds, in small riding horses!

Sarah and Ellie Harper’s Wall Street, still a novice, went on to take another RIHS small hunter win – the 3rd now in as many shows.

Ciara donned her side saddle gear, to win the RIHS Ladies on 5-year-old, Harbour Master, for Liz Trembath and Charlotte Clarke – so elegant for a ladies horse. 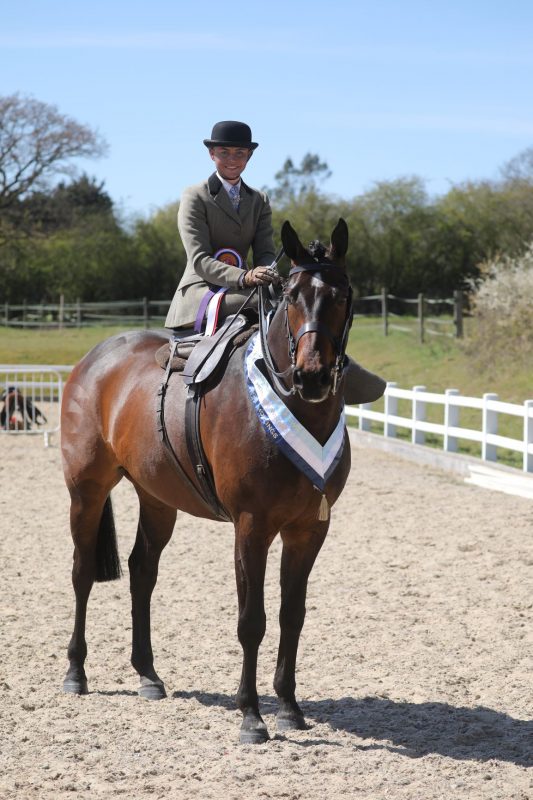 How wonderful to be back on-board Rose Bailey’s Twinshock Warrior, in his first outing since HOYS 2019. He handled the ring easily, taking the hunter and supreme championship. I then had a size difference, riding Linda Upton’s small hack, Whalton Reprise who won and took the hack title.

Onto another relative novice, Liz Edwards’ Assagart Vision, who has only been in the yard a few days and won her 2nd RIHS small riding horse and took the championship.

All 3 horses that we put in the supreme went well, Ciara took reserve supreme on Whalton Reprise and Rose Bailey did a great job on Assagart Vision to take second reserve, having never sat on her before!

Finally, it was the turn of Diane Stennett’s charming Dartans Valentine who won the novice riding horse and novice championship.

I am immensely thankful to all our owners and staff who have endured a tricky year and I am over the moon that we are back doing what we love.  We must give huge credit to the show secretaries who are working with ever changing rules and dates! The sun is shining, and we all feel much more optimistic – long may it last”.