﻿﻿﻿﻿Eleanor Warren and her ex-racehorse Kyle of Lochalsh have won the August Photo-shows.co.uk Absorbine sponsored best turned out class at the first time of entering PSO. 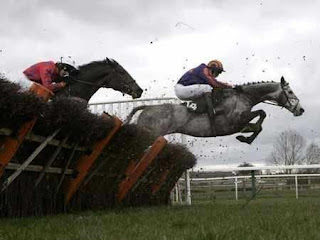 Kyle as he is know has been owned by Eleanor for the past four years after an injury ended his racing career.  He won five times on the flat whilst he was racing, but the 11 year old now has a home for life with Eleanor.  He is very well bred and his maternal grand dam was a sister of the famous racehorse Shergar.

Eleanor said “Kyle goes otu showing every now and then as he is technically lame owing to his racing injury.  Its a shame as he would have made a good Show Hack.  He hates jumping these days so any form of that is out of the question.  Other than that he bums around the field nannying the youngsters and stealing their food!” 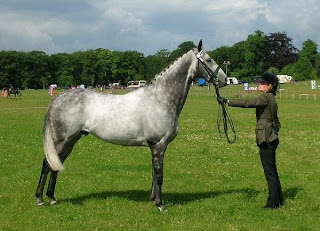 Eleanor came across Kyle through her job as a work rider, she rode him out every day when he was in training.  During the winter Eleanor also goes to the races with the horses and she said “our racehorses get turnedout with plaited manes and tails, quarter markers, the works, it was a very quick learning curve for me – to pull plait and trim a thoroughbred. (Eleanor had previously shown native ponies) Its an amazing job to do and I don’t really consider it as a job, its more of a paid hobby”. 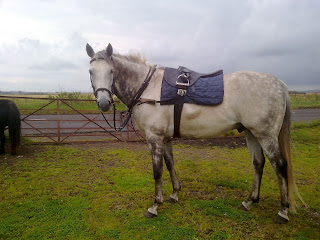 Kyle is the first horse Eleanor has owned, although her family have always been into horses and breeding.  Eleanor is quite a fan of Absorbine products, she said “spending my summers out on the show scene with mainly black ponies with the odd bay or chestnut thrown in I get through a lot of ShowSheen.  Having tried pretty much every version of show shine on the market I think its safe to say I will always stick with Absorbine as it really does make my wee beasties gleam from head to toe.”