A HOYS Trip Down Memory Lane

We all know that this year has been very different for the showing world and sadly HOYS had to be cancelled for the first time since the event was establishment in 1949. Everyone is missing HOYS and that “end of term” feeling, including “Team Ross”.  As we can’t be there, we thought we would take a trip down memory lane with Jayne…

2009 Champion Heavyweight Cob, The Keystone Cob owned by Carol Bardo (this cob was the first one to have the word cob in its name, starting a real trend that still goes on today.)

2019 Hack of the Year, Forgelands Hydepark owned by Miranda Wallace

The only classes I haven’t won are working hunter and Arabs (which I’ve never had).

In 2015, three-time Coloured Champion, The Humdinger was invited to retire at HOYS during the Cavalcade. “Dinger” was ever the showman and proudly walked up the centre line to take his bow. At the top, alone in the spotlight as they read out his roll of honour, he stretched out and had a lovely long pee which everyone thought it was hilarious. He certainly stole the limelight that night and what a way to go out!

The second year The Humdinger won the Colour Championship, some of our fellow competitors, who shall remain nameless, had come back from a fun night out at about 3am and were walking through the stables to get to their lorry. They were surprised to find Dinger happily pottering around, discussing the day with his neighbours! Interestingly his stable door was bolted behind him and although he was clever, we found it hard to believe he closed it himself.  To this day it remains a mystery. Luckily one of these kind people knew who he was and where he should be and put him back to bed. 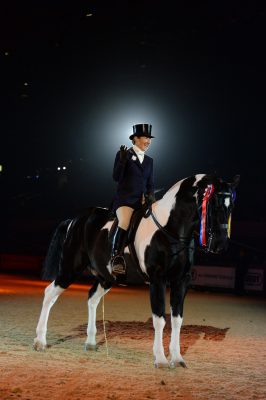 One of my first memories was when HOYS was at Wembley in the Empire Hall. There wasn’t a proper inside collection ring in t

hose days and they used to throw grit and sand down for people to walk their horses around in an area about 20m x 20m; this is where you congregated before your class.

The sounds of the horses hooves on the concrete, the smell of the Jeyes Fluid on the floor (they used this to keep the dust down) and the jangle of the tack – that mixture of noise and smell stayed with me from a child and always reminds me of HOYS.  That was the first year I won at HOYS in the Pony of the Year Championship on Cusop Pirouette, owned by the Gilbert-Scott Family.

When I was a child, HOYS had a wonderful Personality Parade where they invited famous horses of day to parade twice a day for everyone to see.

One year, to everyone’s delight the greatest steeplechase horse of all time, Arkle was there.  He had 22 wins from 26 and won 3 consecutive Cheltenham Gold Cups. There was a coned off area that they sometimes opened to the public so people could go in and meet these famous horses.  I was in there with my Father chatting to Arkle’s groom when they suddenly brought him out and put me on top of him!  People were saying “oh my god I have touched Arkle” but I was lucky enough to sit on him so I suppose I can say that the most famous horse I have ever sat on was Arkle!

Most memorable ride at HOYS?

Each ride of the individual Supreme has been special in its own right.  The first on Soldier Brave because it was the first. The Philanderer was a magical horse but could be difficult to ride, so to win it with him was fantastic.

Comberton Clancy was another special horse, owned by Carol Bardo and bred by Peter and Jackie Hobbs who were all great friends. Winning two years in a row with Broadshard Simplicity was terribly exciting.

To go on to win in the HOYS 70th year on Time 2 Reflect, riding side saddle seemed so fitting because of the history of the hunting world and the showing world coming together.

Then winning again last year on Twinshock Warrior was just the icing on the cake.  How lucky am I to have won 7 times? 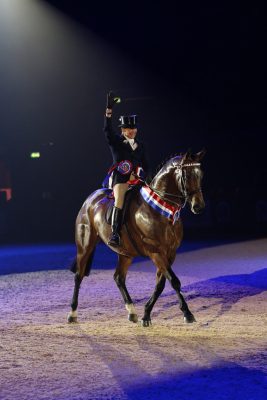 Have you ever forgotten to take something?

The year I forgot to take my Ugg boots was nearly a disaster!  Right at the beginning of the week the judge had just ridden my horse and was about to dismount.  I had hold of the reins when there was a loud bang and all the horses leapt forward, including mine who landed on my foot.  He stood still on my foot while the judge got off and she said, “thank you, wasn’t he good given the loud noise”, then walked away.  I knew I was in trouble and had broken a bone! All I could think of for the rest of the class was how am I going to get this boot off?

We had a very successful class, albeit in a lot of pain but when I took the boot off my foot had already started to swell. All I wanted for the rest of that week were my UGG boots because they are so comfortable and the only thing my swollen foot would have fitted in.

To be able to ride each day I had to put my foot in a plastic bag and slide it into my boot, it was extremely painful and I couldn’t take my boots off all day for fear of not being able to get them back on! That was the year I won Supreme with Comberton Clancy.

Now there are a pair of old UGG boots that live in the lorry!

I am very competitive, and I love producing these great horses, as do the whole team so we will keep on doing our best and looking forward to HOYS each year – there is nothing quite like it.  Hope to see you there in 2021!