HOYS is the climax of the showing year and it is just around the corner. Preparation for sponsored rider Jayne Ross and the team at Carol Bardo’s Moor Farm, is well under way. Jayne has won the title of Supreme Horse of the year at Horse of the Year Show four times in the past ten years.  Jayne and Rosettes Direct, Broadshard Simplicity took the title in 2014, Comberton Clancy won in 2011; 2009 with The Philanderer and 2004 with Soldier Brave. This is a completely unrivalled record so no pressure! The team are heading to HOYS 2015 with a strong list of entries so let’s check out who the team of horses is this year.
Hello Dolly, owned by Dianne Stennett’s, has had a fantastic season. At the Royal International Horse Show (RIHS) she took first in the small hunter championship, and the ladies hunter, and will contest the same classes at HOYS. 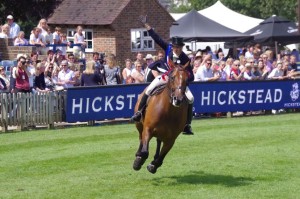 Time 2 Reflect, or ‘Betty’ as she is known as at Moor Farm, gave an incredible performance at RIHS earlier this year. She took the lightweight hunter class and championship title and went on to claim the overall Supreme Ridden Horse Championship. Owned by Diane Stennett, it will be an exciting time at HOYS for Betty.
Jayne will also contest three other hunter’s, Tympony King, 6 year old middleweight Bloomfield Tetrarch, and five year old heavy weight Bloomfield Excelsior.

Last year Broadshard Simplicty, owned by Rosettes Direct, took centre stage at HOYS by being crowned Supreme Horse of the Year Champion, ridden by Jayne. Earlier that day, the pair took Riding Horse of the Year Champion and went on to take supreme making it Jayne’s fourth HOYS Supreme title. All eyes will be on Jayne and Broadshard Simplicity this year.

Jayne will also have Aidensfield Rupert in the coloured and middleweight class; Cobin Hood and It’s Abracobdabra wil contest the cob classes; Fantastic Gift in the Small Hack class, and Casino and Romanno Bedriska for the Riding Horse classes.