Lucy and Wurth Win The July PSO Best Turned Out 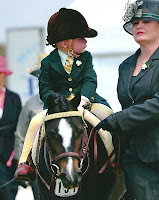 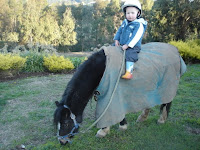 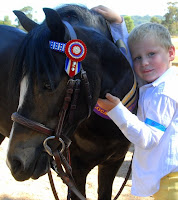 The July entries for the PSO, Absorbine sponsored Best turned out class were the best yet! The worthy winner was Car Von Allure (Lucy) with 6 year old Worthington Coffield and his mother Tammy Kuiler.

The Kuiler family have owned Welsh Section A, 11.2, Lucy for 5 years. Tammy said “Lucy’s owner and breeder needed to find a home for a pony very quickly, so a close friend was going to have the pony. When the lorry arrived – there were two ponies in it! As soon as I saw the little black pony, I knew I wanted her to be mine!”
Lucy was completely unhandled and unbroken when Tammy bought her. She has such a sweet nature though that Wurth was soon playing with her in his sandpit and now they are the best of friends.
Tammy said “Lucy and Wurth have been to the Pony Club and have been competing in shows for the last three years. They have done everything from gymkhanas to big shows. They are well known around the area for their fancy dress class outfits. They started off as Batman and Robin and now thcosume is King Neptune riding his seahorse. Hopefully by this time next year they will be ready to compete off the lead rein.”

Tammy and Wurth have been competing in PSO since January this year. Tammy said “Wurth and myself and the beloved horses and ponies have become addicted to PSO and their beautiful rosettes and the wonderful competitors we have become friends with along the way”. Tammy also owns a 4 year old pony, Holly who Wurth will ride when he outgrows Lucy. There is also a nine month old foal who has also already made an appearance on PSO!
Absorbine’s Super Shine hoof polish is a firm favourite of Tammy’s.