Leigh Pedler from Cholwell Equestrian Centre near Okehampton in Devon was the winner of the 2012 Absorbine sponsored Grooms Home & Away Award presented at the Showing Council and Showing World Awards during the Horse Of The Year Show.

Leigh who hasn’t had a day off for 8 years was thrilled to win the award and delighted to accept his basket of Absorbine products which will go to good use on the team of 17 horses that he looks after for next season.  Leigh works tirelessly around the yard and in addition to this is often found stewarding at shows or course building.  He also spends the summer months driving to and grooming at shows for his daughter, Tabby who has had great success with her Welsh Section B pony this season, winning at both Devon County and the Royal Cornwall shows.

Beverley, Leigh’s wife had kept the nomination for the grooms award a secret and Leigh only found out about it three days before traveling up to the award ceremony.  Beverley said “I had a bit of a job to keep it a secret as everyone around knew about except Leigh!”

Always happy to help others, Leigh said, “I do it because I enjoy it!  It was great to attend the award ceremony at HOYS and so wonderful that for once ordinary people can have their say.  I am thrilled to win this award”. 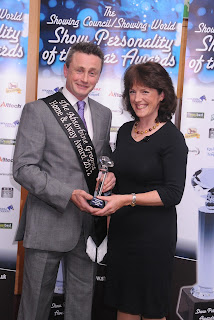 Jayne Ross collected the runner up prize for Mark Chesters. 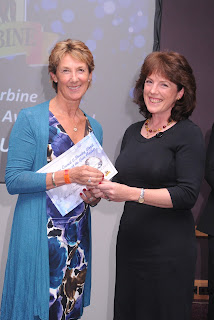 Nominations for the 2013 Showing Council and Showing World Absorbine Grooms Home and Away Award will open at the beginning of February 2013. For further information please visit www.showingawards.co.uk