2011 Horse Of The Year Show Supreme In Hand Pony Champions, The Popsters Show Team are now sponsored by Absorbine – The Horse World’s Most Trusted Name. 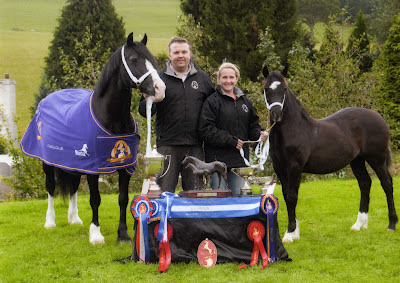 Justin Davies and his partner Heidi Bennett run the Popsters Stud in Gloucestershire, breeding and showing Welsh ponies in hand.  They had a tremendous season with their homebred ponies in 2011, culminating with Parvadean Delight winning the Supreme In Hand Pony Championship at HOYS.  By taking this title Parvadean Delight has earned herself a place not only in her breed’s history but also the HOYS Hall Of Fame by becoming the first Welsh pony of cob type to take this prestigious final since it was started back in 1965.  Justin and Heidi also help run the Parvadean Stud for Justin’s father Jack and brother Jeremy.

Heidi said “we show all four sections of the Welsh stud book but primarily we show Welsh mountain ponies (Section A) and Welsh ponies of cob type (Section C).  Our breeding programme focusses on breeding a certain type of Section C pony – “The original pony of cob type” with the emphasis on the pony traits.  Over the last 15 years we have been lucky enough to produce for many of the top Welsh studs around the UK and we have also produced for owners as far away as Sweden and Australia”.

“We use Absorbine ShowSheen in the ponies manes and tails on a regular basis to keep them tangle free and easy to manage but especially before a show after bathing we apply it all over the body, mane and tail”.

To find out more about Absorbine products see www.absorbine.co.uk or find us on facebook www.facebook.com/AbsorbineUK

Absorbine products are available from all good equestrian retailers.