Horse of the Year Show is the highlight of the showing calendar. This year it is being held on 5th – 9th October at the NEC in Birmingham; a five day equestrian spectacle and Absorbine sponsored Jo and Holly Bates are there with five horses.

We caught up with them to see who they are taking to HOYS 2016.

Elusive, a large hack owned by Suzanna Welby, has had a successful season and successfully qualified for HOYS at Hickstead Derby Meeting where he was first in his class and reserve champion.
In July, Jo won the hotly-contested SEIB Racehorse to Riding Horse class aboard Sophie Tranter’s  Bang on Trend, securing their HOYS ticket.

Gallifrey SWS, owned by lady Benton Jones, will contest the Large Non Native Horse Coloured class. He qualified at CHAPS South East and was also crowned Supreme.
Lowmoor Windsor, owned by Ann Drabble, earnt this HOYS ticket at Midland Counties winning the Middle Weight Hunter class and was champion.
We wish Jo, Holly and the rest of the team the very best of luck at HOYS. If you are heading to HOYS, the very best of luck to you too and don’t forget your ShowSheen! 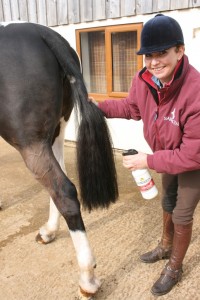