Jo has won titles at both Horse of the Year Show (HOYS) and the Royal International Horse Show (RIHS). She was the 1978 British young rider dressage champion and has had many wins in both dressage and showing. Jo’s daughter Holly is following in her mother’s footsteps and only just out of young riders has already had considerable success in the dressage arena taking several national dressage titles. Holly is also an accomplished show rider, competing at HOYS and RIHS with some great results.

Jo grew up around ponies and having been on the British young rider dressage team and winning the Side-Saddle Rider of the Year title, she took a job at the world famous Catherston Stud. Jo did everything at Catherston from breaking in horses, to secretarial duties to competing in both dressage and eventing. 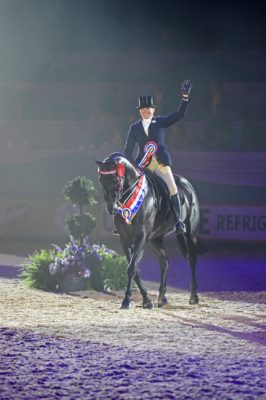 A stint working for legendary show-jumper, the late Iris Kelleway was followed by taking on a position at the Broadstone Stud. Here – in addition to winning numerous national dressage titles – Jo went on to take the Royal International Horse Show Supreme Horse title in 2002 with Broadstone Dee. This horse and Jo also won the Horse of the Year Show, Riding Horse of the Year in 2002. When the Broadstone Stud was disbanded in 2003, Jo set up her own yard. 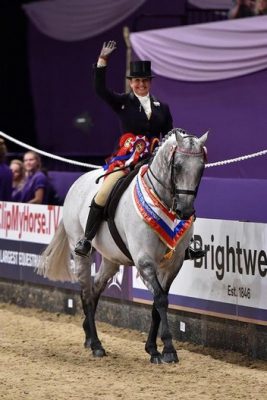 Jo’s daughter, Holly Bates works alongside Jo and has forged herself a great career in dressage. Holly has won at Advanced Medium level with her top horse, Cambridge and takes on rides to considerable success in the show ring too and has qualified for HOYS and RIHS with excellent results.

“Jo, Holly and their horses are the consummate professionals and are always turned out to perfection – Absorbine are proud to be associated with them.” Rachael Holdsworth, Absorbine European Marketing Manager.