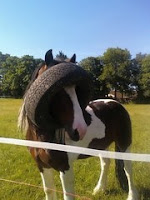 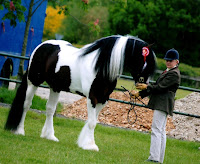 Sophie Brown and her stunning Welsh Cob X, Sam The Man have won the October PSO, Absorbine sponsored Best Turned out class at the first time of entering a PSO class.
Sophie has owned Sam for a year, she said “I saw the advert for him on the internet and he caught my eye immediately, but he was far more money than I could afford.  The advert said he was only for sale so the owners could concentrate on RoR and Ex-Racehorse classes.  I had a beautiful ex-racehorse at the time so I sent them an email offering a part exchange, which they agreed to and Sam is now mine.”

Sam is now 7 years old and has had a successful season with Sophie showing in ridden and in hand classes.  They have taken part in Traditional Gypsy Cob Association classes and the British Skewbald and Piebald Association classes.  Sophie said “I like PSO though as it gives me the chance to compete when its not possible to go to a competition.” 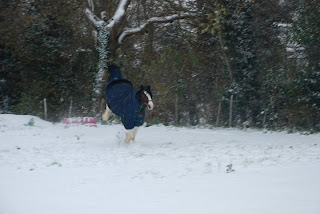 Sophie works at Kempton Park Racecourse in security and as a steward.  She combines this with producing show horses, some of which she owns herself and others which are produced and competed for owners.
Sophie said “I regularly use a range of Absorbine products and I think they’re FAB!  The products I use include SuperShine, both clear and black, ShowSheen and SuperPoo shampoo”.